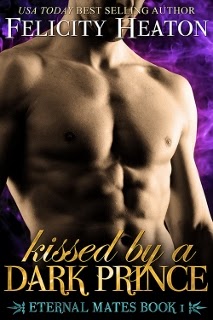 Thank you for having me here again at your blog, Will! This time, I’m here to share an excerpt from my new release, Kissed by a Dark Prince, which is the first book in my hot new paranormal romance series, Eternal Mates.

Kissed by a Dark Prince (Eternal Mates Romance Series Book 1)
Felicity Heaton
Olivia thinks it’s her lucky night when a dangerously handsome unconscious fae ends up on her inspection table. He’s her chance to redeem herself with her employer, the demon-hunting organisation, Archangel. But when the tall, dark and deadly immortal warrior awakes, she gets much more than she bargained for…

Attacked by his enemy in the elf kingdom, the last thing Prince Loren expects when he comes around is a beautiful angel watching over him and medical technology of the mortal realm. Hazy from his injuries, all he can focus on is the pulse ticking in her throat and the sweet allure of her blood.

One single bite reveals she is his eternal mate, triggering a bond between them that will leave him weakened until it is completed… or broken, and pulling Olivia into the crossfire of his ancient feud.

To protect his people and his mate from the machinations of a madman, Loren must risk everything by working with Olivia at Archangel to find a way to break the bond blossoming between them.

But will Loren be strong enough to place duty before desire and give up the one thing he has waited millennia for and craves above all others—his eternal mate? And will Olivia be able to resist the incredible heat that burns between them and the temptation of her dark prince’s kiss?

Kissed by a Dark Prince is available from Amazon Kindle, Kobo Books, Barnes and Noble Nook, Apple iBooks stores and other retailers. Also available in paperback. Find the links to your preferred retailer at: http://www.felicityheaton.co.uk/kbadp

Kissed by a Dark Prince – Excerpt
“Specimen appears to have advanced healing ability. Age of blood around the wounds is indicative of a recent injury, but the wounds in question are already closed and beginning to scab over.” Many demon and fae species had heightened healing. He could be any number of them. Olivia carefully pulled his upper lip back and studied his teeth. “No fangs. Canines appear normal.”

She drew back and something caught her eye. She parted the wild strands of his short black hair and traced the pointed tip of his ear. Was he a demon? They had pointed ears.

Olivia hovered over him, looking down at his handsome bloodstained face. She had never seen a demon as beautiful, mysterious, or deadly as he was.

She could feel it like an aura around him.

Olivia scooted backwards and reached for the call button on the wall near the head of the bed. She didn’t make it. His eyes slowly opened and she froze in mid-swing for the button, transfixed by them. They were incredible. She had never seen eyes like his. His irises were the most amazing shade of purple.

His gaze slid towards her but he didn’t move.

“What are you?” Olivia whispered it again as his eyes began to change, shifting to a normal shade of blue, and then his ears changed too, the points dulling until they appeared human. Adapting. He was studying his environment and her, and he was adapting.

She lowered her hand to her side and stared at him.

“Specimen appears able to blend into his environment, changing his appearance to conceal himself.”

She had never seen a demon do this. Many of them did it and she had heard the tales from the field agents, but she had never witnessed it.

“You are being held in a secure facility and no harm will come to you.” She hoped he understood English. His blue gaze narrowed with his frown, locked on her mouth as she spoke. Maybe he didn’t understand her.

He sat up in one fluid motion, swinging his legs over the edge of the inspection table, the movement so swift that it startled her and she shot backwards, distancing herself. Her heart thundered in her throat. She should have pressed the call button.

She should have strapped him down.

Her gaze darted to the red button off to her right. Could she make it there and sound the alarm before he attacked?

“Where am I?” The sound of his deep voice sent a fiery tremble through her. It was at odds with his lithe figure. The commanding edge to it had her forgetting the call button and automatically answering him, because he didn’t sound like the sort of man you could piss off and live to tell the tale.

“At a secure research facility in London.” She hoped he didn’t ask what she had been doing to him while he had been unconscious because now that he was awake, very awake, that sense of danger he radiated had only grown stronger. Her shot at resuscitating her ailing career looked as though he might kill her if he didn’t like any of the answers to his questions.

His blue gaze moved around the room, cataloguing everything, a keen edge to it. Strategising. He had adapted to blend into his environment and now he was plotting a way out of it.

“How did you do that?” she said, unable to get her voice above a whisper. His attention snapped back to her.

“How did I do what?” He could definitely grasp her language.

“Your eyes... your ears.” She pointed a shaky finger at them.

He planted his hands on the edge of the table on either side of his hips and she struggled not to look down. Her guest didn’t appear to have any qualms about being naked in front of a stranger. He sat on the table, frowning at the equipment in the room. His gaze caught on the wires attached to the machines and he followed them to his chest. He raised a single black eyebrow and pulled the sticky pads off his body.

“Strange to ask me how and not why,” he said at last and looked up at her through his long black lashes, his blue eyes holding a glimmer of curiosity.

“I’m a medical doctor... a scientist.” She pulled at the chest of her long white coat, drawing his attention to it.

He glanced at it and then back around the room. His gaze lingered on the tray of tools to his left, narrowed, and then slid to her. A threat. She had enough experience of the world to know when someone was silently threatening her. He didn’t intend to use the scalpels and other implements on her. No. He meant to warn her that if she dared to attempt to use them on him, she would come off worse.

Olivia held her hands up in front of her. “Listen, I’m just curious about your species, and the things you can do. I wanted to help you.”

He grimaced and his grip on the edge of the table tightened until his arms shook. He ground out dark words in a foreign tongue and paled further. The edges of his irises turned purple.

The heart rate monitor still linked to his finger went crazy. He scowled at the machine and tried to move to take the clip off. His hands trembled violently.

“You’re not well.” Olivia reached out to steady him, instinct telling her to help him. She caught his upper arms and gasped. He was burning up, shaking beneath her fingers, his skin clammy. “You need to rest.”

“I will be fine... with a little fluids.” Pain grated in his deep voice and he swallowed hard.

He leaned forwards and his breath skated over her bare neck. She shivered, a hot rush sweeping through her.

“I know what fluid I need,” he whispered low, his voice barely there and teasing, stirring unbidden heat in her veins and quickening her pulse.

“Tell me and I’ll get it.” She tried to draw back and his hands shot up, fingers closing tightly around her upper arms.

He struck hard on the left side of her throat and her eyes widened. Shock stole her senses for a second before reality came crashing back. He was biting her. He was drinking her blood. Dark memories surged to the surface and she fought his hold on her, struggling like a wild thing. She wouldn’t let it happen to her again. She shoved at his chest, clawing with her short nails, and pounded her hands against it, striking as hard as she could.

He pulled her against his chest, caging her there, his arms steel bands across her back, pinning hers between their bodies. She wriggled, desperate to escape him, fear pounding down on her and making her heart stutter. He was going to drink her to death.

Tears streamed down her cheeks and her head spun, wooziness threatening to pull her down into the darkness.

“Please,” she whispered, breathless and weak, barely clinging to consciousness as her panic and fear overwhelmed her. “Release me... don’t kill me.”

Kissed by a Dark Prince is available from Amazon Kindle, Kobo Books, Barnes and Noble Nook, Apple iBooks stores and other retailers. Also available in paperback. Find all the links at: http://www.felicityheaton.co.uk/kbadp 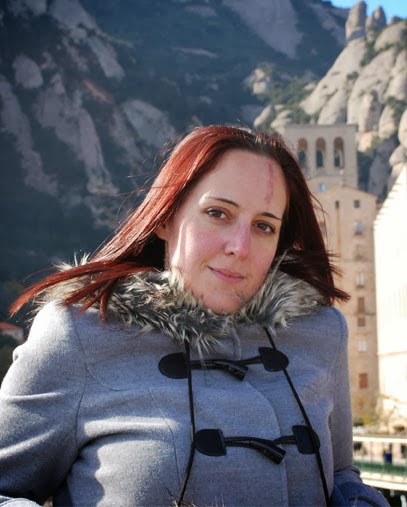 If you're a fan of paranormal romance authors Lara Adrian, J R Ward, Sherrilyn Kenyon, Gena Showalter and Christine Feehan then you will enjoy her books too.